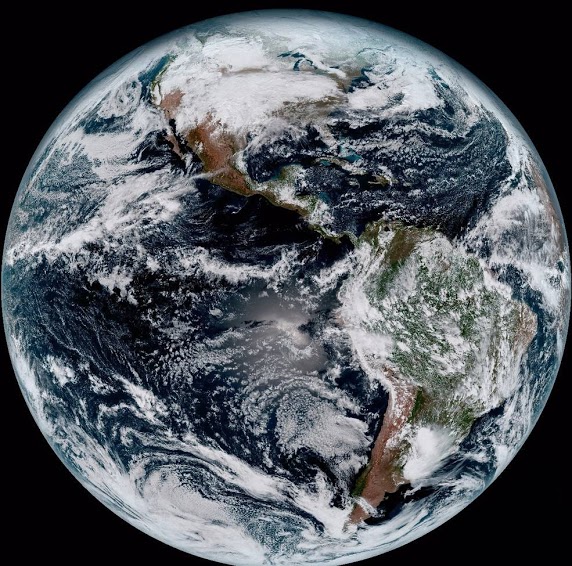 The satellite image on the left is a composite color full-disk visible image of the Western Hemisphere was captured from NOAA GOES-16 satellite at 1:07 pm EST on Jan. 15, 2017 (the very first image of GOES-16). The “white stuff” in the image are clouds. In fact, at any given time, clouds over about 60% of the surface area of our planet. They play a pivotal role in determining the radiative energy budget of our climate system. On one hand clouds reflect the incoming solar energy back to space which tends to cool the surface. On the other hand, same as greenhouse gases clouds absorb the thermal infrared energy emitted by surface which keeps the surface warm.

A major research area our group has been working on since 2011 is in the satellite-based remote sensing of marine boundary layer (MBL) clouds. MBL clouds cover about 20% of Earth’s surface and play a critical role in modulating the radiative energy budget of our climate system. At present, satellite-based remote sensing is the only means of measuring the properties of MBL clouds, such as the cloud water budget and cloud droplet size, on the global scale. Although operational satellite products from satellite sensors, such as MODIS (Moderate Resolution Imaging Spectroradiometer), have been available for many years, the quality and uncertainties of these products remain largely unknown. For example, even though clouds have highly variable 3-D structures, they are usually assumed to be homogeneous both vertically and horizontally, known as the plane-parallel cloud assumption, in the operational satellite remote sensing algorithms for simplicity. A major branch of our research is focusing on the satellite remote sensing of MBL clouds. More specifically, our research in the direction aims to identify and explain the problems and errors caused by the plane-parallel cloud assumption in MBL remote sensing and explore the novel method for improvement. Since 2011, our group published a series of papers in this direction [Zhang and Platnick, 2011; Zhang et al., 2012; Zhang, 2013; Cho et al., 2015; Zhang et al., 2015; 2016a; Werner et al., 2018a; 2018b; di Noia et al., 2019; Alexandrov et al., 2020]. Together, these papers provide a systematic and insightful understanding of how cloud horizontal and vertical inhomogeneity, and the associated 3-D radiative transfer, influence the satellite-based cloud property retrievals and the potential implications for aerosol-cloud interaction and climate modeling studies